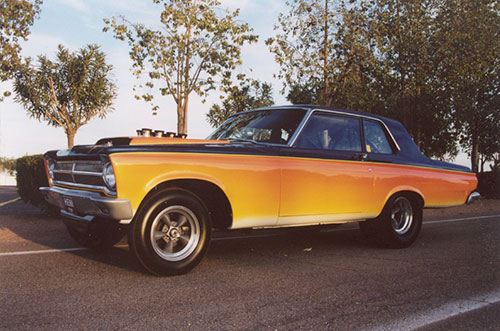 It is 1964, and Chrysler corp. is faced with a dilemma. Ford and Chevrolet are slated to install their big block motors in their down sized mustang and falcon fords, and Chevy nova passenger cars, for the 65 drag race season. Neither Dodge or Plymouth have a platform to accept the mighty Hemi, other than their B-body offerings. This puts them at a distinct disadvantage, so Jim Thornton, W.R. Rodger, and H.J. McNichol decide to expand on the 2% cars that were built in 1964 by radically altering the wheelbase on the 65 model B-bodies. The A/FX class would never be the same. With a 10” and 15” relocation of the front and rear axles, as well as a 5” shorter wheelbase, the cars gained enough advantage to make them competitive for the class. Amblewagon was contracted to build 11 hardtop cars, with one Dodge sedan built by Dick Branstner for Bill Flynn. Although initially disallowed by NHRA, AHRA embraced them, and the official debut was The Winternationals at BeeLine Dragway in Jan. 1965. Bud Faubels’ Hemi Honker won the class. The match race madness had begun.